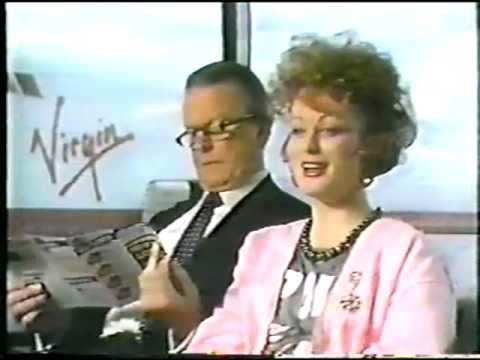 Virgin Atlantic
Fortunately, Orwellian’s dystopian vision of a future ruled by Big Brother had not come to pass. But that didn’t stop the show-stopping advertising launch of Apple’s Macintosh computer featuring a heroine representing the coming of the Macintosh as a way of saving humanity from conformity. It was directed by Ridley Scott and first aired during the third quarter of Super Bowl on 22 January 1984.

Another disruptive force flew into the skies as Richard Branson, best known for Virgin Records, challenged British Airways with the Virgin Atlantic airline. It made its first flight on 22 June using a leased Boeing 747 from Aerolineas Argentinas packed full of celebrities.

Virgin Atlantic launched in 1984 with Richard Branson’s declaration to ‘succeed in the first year or exit the market.’ With this target they became profitable within 12 months.  By 2012 the company had grown to carrying 5.4m passengers making it seventh-largest UK airline in terms of passenger volumes. In 2017 Virgin Atlantic announced a partnership with Air France-KLM, a deal which was completed in 2019.

Meanwhile, Alan Whicker was flying all over the world advertising Barclaycard. Other award-winning advertising included, “Hello Tosh, got a Toshiba” and the Great London Council’s “Say No to No Say” campaign to prevent its own abolition. Dulux paint was recognised for successfully launching a new paint range of tinted whites, Dulux Natural Whites.

It was a good year for toys, if you liked them cuddly. Cabbage Patch Kids, which each came with an individual name and birth certificate, flew off the shelves and the Care Bears, which began as greetings cards and included Funshine Bear, Cheer Bear and Love-a-lot Bear soon got their own TV show.