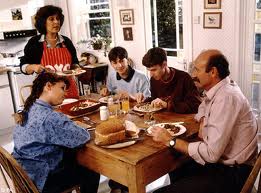 Oxo
In 1983 we had a reason to get up early in the morning with the advent of TV-am breakfast television. A Swiss watch company Swatch introduced the concept of fashionability to watches and the CD was launched. British students clamoured to ask Blockbuster’s host, “Can I have a P please, Bob” and every little girl could afford their own horse thanks to My Little Pony.

It was a golden year for advertising with both Yellow Pages and Oxo launching successful, longstanding campaigns. “Good old Yellow Pages” introduced us to an elderly man trooping from book shop to book shop searching for a book on Flyfishing by an author called J R Hartley. Triumphantly tracking it down through Yellow Pages, he reveals that he himself is called JR Hartley. The ad ran for over 10 years.

Meanwhile the Oxo family, first introduced in 1983, were one of Britain’s most popular “soap operas”, featuring in a series of 42 ads over 16 years. Starring Lynda Bellingham as a working mother and Michael Redfern as a modern father, Oxo intended to give a more realistic insight into life around the kitchen table, including some bickering. Britain quickly warmed to the squabbling brood and after the first advert was aired, sales rose by 10 per cent.

Lucozade rebranded itself into an energy drink, a successful repositioning that has become a text book case study. By broadening its appeal from a drink for the ill “Lucozade aids recovery” to “Lucozade replaces lost energy”, it appealed to a much wider audience. The ad campaign featured Olympic champion Daley Thompson. Between 1984 and 1989, the value of the UK sales of Lucozade tripled to almost £75 million.