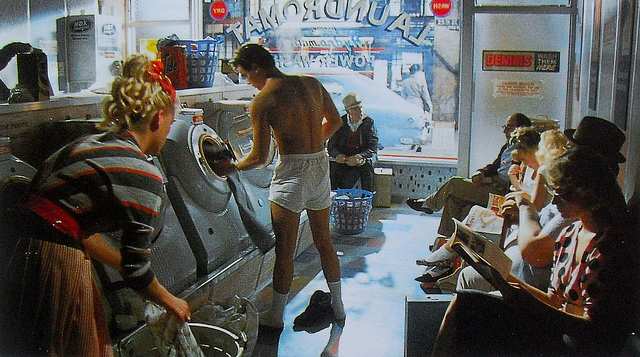 Levi’s
We heard it through the grapevine sounded the death knell for Y-fronts across the UK, as Nick Kamen stripped down to his white boxer shorts to wash his Levi 501s in the laundrette. It was a seminal moment in advertising and had a dramatic effect on the sales of both Levis jeans and boxer shorts.

It was a significant year for technology. The first version of Microsoft Windows was launched causing ripples of change across the computing industry. Then, a new telecoms company called Racal Limited was formed. It would later be renamed as Vodafone. On a slightly different scale of significance, it was also the year of the robots in disguise – Transformers.
Two food brands made an entrance this year. First, Dorset Cereals, the breakfast cereal that has quietly built market share ever since. Then there was HobNobs from McVities who first introduced the brand to Scotland. It was made especially for dunking in tea, a liquid in which it does not lose its shape.

“Cor, it stinks in here” were the immortal first words to usher in the BBC’s ambitious new soap Eastenders. It was also the year Cilla Black dominated Saturday night TV with Blind Date.
Flexi Singles, ultra-thin records were given free inside pop magazines, bags of cereal, new bank accounts and practically anything else that required a free gift this year. However, the sound quality was not fantastic while a 10 pence piece was needed to hold the record on the turntable.