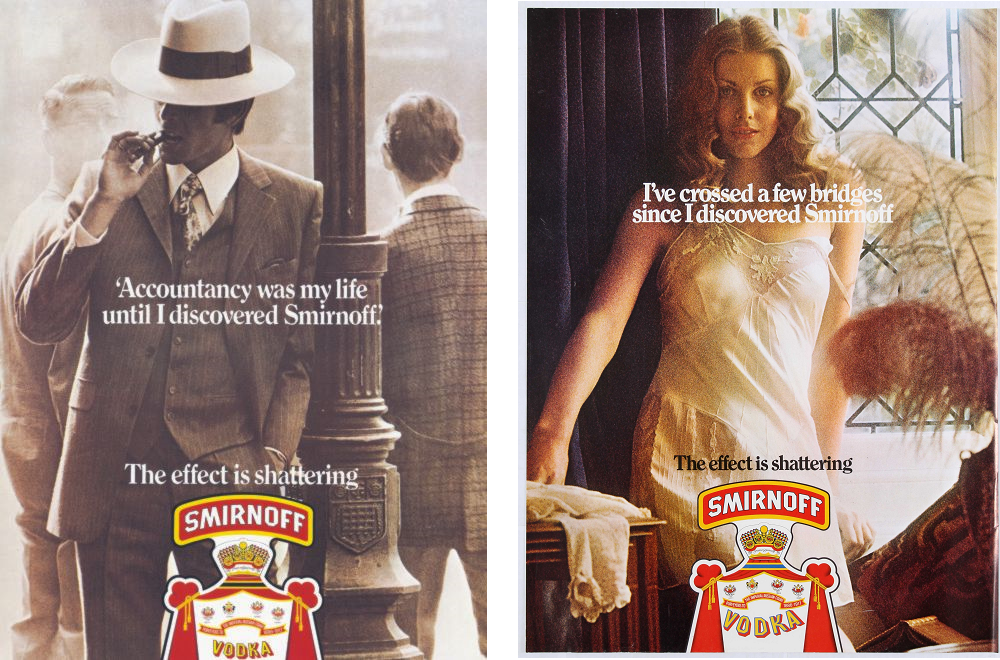 Smirnoff
Smirnoff made vodka chic, Martians mocked us for mashing potatoes, The Tetley Tea Folk soothed us with a cup of tea and the Cadbury Flake Girl seduced us with the crumbliest, flakiest chocolate. Meanwhile every young kid wanted to be cruising up and down their street on the Raleigh Chopper.

Although vodka was slowly growing in popularity, it wasn’t until Smirnoff’s ‘The Effect is Shattering’ campaign, that vodka became a chic drink for the young. IDV’s marketing director Tim Ambler and Y&R created a print and outdoor campaign that revealed how Smirnoff could transform the humdrum into glamour and excitement.

Cadbury’s Smash campaign starred a family of Martian robots who laughed at the thought of Earth people preparing their own mashed potatoes rather than using Smash, ‘For Mash get Smash’.
Tetley Tea introduced us to some less alien, animated characters called The Tetley Tea Group, who went on to star in the brand’s advertising until 2001. ‘Tetley make tea-bags, make tea,’ was one of the earlier strap lines.

In the same year, R Whites Lemonade launched its most famous ad campaign, ‘The Secret Lemonade Drinker’, which remained on screen until 1984. The ad featured a man in striped pyjamas creeping downstairs to raid the fridge for R Whites Lemonade.

It was a year of big hair with hairstyles like the ‘shag’, ‘gypsy’ and ‘Afro’ growing in popularity and size. Gentle comedy from three mischievous pensioners, one naive simpleton and the staff of an old-fashioned department store kept us amused as Last of the Summer Wine, Some Mothers Do ‘Ave ‘Em and Are You Being Served? aired for the first time.