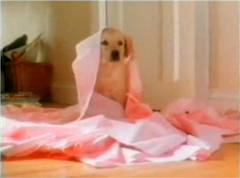 Andrex
Animals were taking over the TV screens, from the cool Cresta bear, to the cute Andrex puppy. Not to mention Geoffrey, Zippy, Bungle and George from the new TV kids show, Rainbow. (Incidentally, film star Jeremy Irons began his career on Rainbow singing songs about happy clouds.)

The Andrex puppy, a golden labrador, scampered into people’s hearts for the first time by pulling the new Andrex paper down the stairs. “Soft, strong and very long!” The puppy has starred in Andrex advertising ever since and his image is now printed on the paper itself. It was probably just a coincidence but this was also the year that Danny Osmond topped the charts for five weeks with “Puppy Love.”

Then there was the Cresta bear, a “cool” polar bear in shades whose image has outlasted the soft drink he advertised in public memory. He was the bear that inspired The Fonz. He was the bear sent into ecstasy every time he tasted Cresta drinks. “Rimsky Korsakov! It’s frothy, man!” Like many other enduring advertising characters of the 1970s and 1980s including the Smash Martians, the Cresta Bear was created by John Webster, creative director DDB.

Mastermind, the high brow quiz show hosted by Magnus Magnusson with the intimidating black leather chair made its debut. A very different media property made a big impact on the British population as Cosmopolitan magazine, already popular in the US, launched. Men viewed the magazine as Playboy for women but women viewed it as part of a feminist ideal and it flew off the shelves.