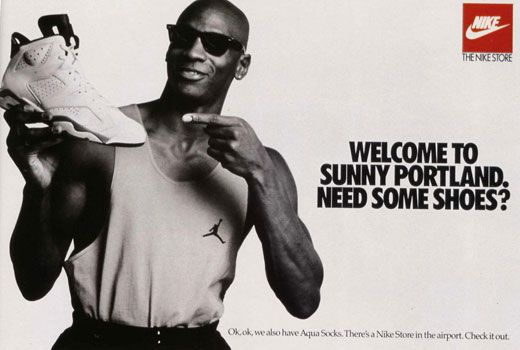 Nike
It was Manchester’s moment. Everyone under the age of 30 queued to get into the Hacienda night club while indie bands The Stone Roses, Happy Mondays and Inspiral Carpets hit the charts.
Nike’s slogan “Just Do It” was gaining momentum as Nike splurged $45m on advertising featuring stars Michael Jordan and Spike Lee. The slogan had been coined the previous year by advertising executive Dan Wieden in a meeting with Nike employees. It has been named as one of the top five ad slogans of the 20th century by Ad Age magazine.

British Airways also introduced its new slogan, “The world’s favourite airline” and along with Saatchi&Saatchi created a sweeping, classic TV ad campaign called Face, which featured an aerial view of hundreds of people making the shape of the face.

First Direct, the telephone bank, was causing ripples across the banking industry. Launched by Midland Bank as an alternative to high street banks, First Direct has grown to become the most recommended bank in the UK and set a much-needed precedent for good customer service in an industry renowned for neglecting its existing consumers. First Direct took 1000 calls within its first 24 hours and had 100,000 customers by 1991.

The Nintendo Game Boy launched this year changing the face of computer games. Now gamers could game wherever and whenever they wanted to. The first Game Boy was sold with the puzzle game Tetris and beat off competition from the Atari Lynx with a lower price and longer battery power. Since launch Game Boy has sold nearly 120 million units worldwide.