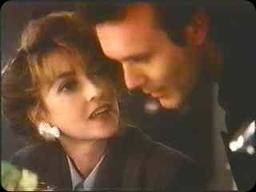 1988 spawned a series of catchphrases from Nike’s “Just Do It”, “Cowabunga” from the Teenage Mutant Ninja Turtles, “Loadsamoney” from Harry Enfield and “an ology” from BT’s Beattie. Then there was Hello! As Spanish celebrity magazine Hola! launched a British version, it spelled the beginning a new age of celebrity where footballer’s wives rubbed shoulders with European royalty. It was the year Channel 4 came of age, replacing its founding chief executive Jeremy Isaacs with Michael Grade. Grade was under a little pressure from his predecessor who threatened to throttle him if he failed to respect the channel’s remit. The previous year, Channel 4 had stormed into profit – an impressive £20m, just five years since it made its debut with teatime game show Countdown.

Nescafe
The original ‘Gold Blend couple’ campaign ran between 1987 and 1993 and was 12 45-second instalments. They starred Anthony Head and Sharon Maughan, a couple who begin a slow burn romance over a cup of coffee. The ads were in serial format, each ending in a cliffhanger. They were extremely popular, each receiving considerable media attention upon release. They remain one of the most famous examples of serialised advertising.

It was a stellar year for advertising. The MK II Volkwagen Golf’s success was sealed as Paula Hamilton rejected the fur coat and pearl necklaces and kept the car keys instead. Then there was the award-winning Real Fires TV campaign. Set to the soundtrack, “Will you still love me tomorrow?” The dog kissed the cat kissed the mouse, all in front of a roaring fire.

BT’s Jewish grandmother Beattie played by Maureen Lipman made her first appearance in 1988 commending her grandson Anthony who has failed most of his exams aside from pottery and sociology. “He gets an ology and he says he’s failed… you get an ology you’re a scientist…” cries Beattie. She went onto star in 32 TV ads.