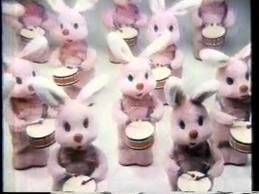 Duracell
It was a good year for Charlie. As Charlie Chaplin was knighted by the Queen, British women were dousing themselves in a new Revlon perfume called Charlie. Remember the song? “There’s a fragrance that’s here to stay, And they call it… Charlie, It’s kind of fresh, kind of NOW – Charlie! It’s kind of new, kind of WOW – Charlie!”

Young ladies were introduced to the delights of the Parker Lady Pens by actress Penelope Keith posing as Madame at a Swiss finishing school. “…your final and most important lesson: how to spend Daddy’s lovely money. Cheque books open girls, pens at the ready! A pen with style! A pen with à la!” The Duracell bunnies also made their debut this year, playing the drums “on and on,” as kids were told that milk is good for you.

Meanwhile, the Kevin Keegan perm was the height of fashion and Womblemania was gripping the UK. We were enthralled by a manic hotelier called Basil Fawlty, the shades of grey in The Sweeney, and a man with a big cigar, Jim’ll Fix it. As Margaret Thatcher won a landslide victory to rule the Tories, Wonder Woman kerpowed onto our TV screens.

We were told the Eight-Track Tape would revolutionise the way we listened to music in our cars, but the chunky cartridges filled with fraying tape didn’t hang around for long.
Quietly across the Atlantic, a 20 year-old Harvard student called Bill Gates launched a company called Microsoft in Albuquerque, New Mexico, USA. And David Ogilvy developed the “Don’t Leave Home Without Them” ad campaign for American Express Traveller’s Cheques, featuring Oscar Award-winning actor Karl Malden, who became the public face of the brand for 25 years.