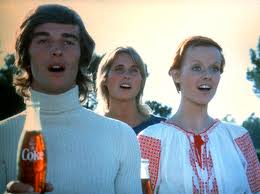 Coca-Cola
“I’d like to teach the world to sing, in perfect harmony,” sang Coca-Cola and a group of young people on a hilltop near Rome, Italy. The ad jingle was so popular that the song became a hit in its own right, albeit without the Coke references. The song has since been recorded over 75 times and is credited with helping Coca-Cola regain its status.

Meanwhile, Jimmy Saville was reminding us to wear car seatbelts with, “Clunk Click Every Trip.” The campaign helped to lay the groundwork for compulsory seatbelt wearing in the front seat, which was law by 1983.

Space Hoppers bounced into the UK in the summer of 1971 and hot pants were so popular that even Royal Ascot had to relax its dress code. And we were getting taller. Average height rose by two inches as we tottered around on high platform shoes.

Thank goodness for Nike. Its “swoosh” design was created this year, although the first shoes bearing the logo didn’t appear until 1972. There were a number of firsts this year – Gilette’s Trac II, the world’s first two-blade razor, the world’s first commercial microprocessor chip from Intel and, last but not least, the karaoke machine, invented in Japan.

When we weren’t bouncing around on Space Hoppers or tottering on platforms we were watching The Liver Birds, The Two Ronnies and The Generation Game hosted by a comedian called Bruce Forsyth.