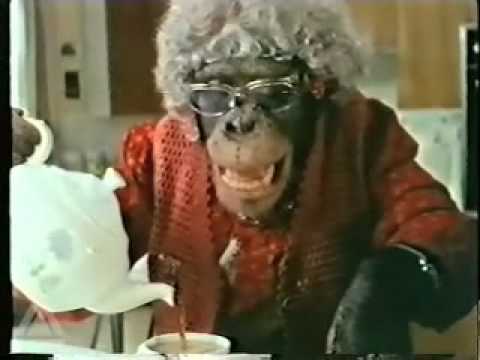 PG Tips
It was a year painted with kaleidoscopic colours. As hippies brightened the high streets with patchwork gypsy skirts and shaggy Afghan coats, lorry drivers campaigned against the sad demise of the mini skirt. Meanwhile, Monty Python’s Flying Circus added its own swirl of colours with the new cult comedy series that broke all the rules. The first season was so poorly received that it was replaced by a farming programme in the Midlands.

Persil washing powder was all about the whites, following the launch of Persil Automatic. As a little, blond-haired girl played in a garden that looked like a summer meadow, her mother got on with the washing. “One of the signs of a mother’s care, Persil washes whiter…”

This year, PG Tips made its best loved TV ad starring the family of chimps who had featured in their ads since 1956. Two removal chimps are struggling with getting a piano down the stairs, until PG Tips refreshes them. “Dad, do you know the piano’s on my foot?” “You hum it son, I’ll play it!” This followed by the strap line, “There’s no other tea to beat PG.”

We were also humming the advertising jingle for a drink that was best shaken and not stirred. “Any time, any place, anywhere, there’s a wonderful world we can share. It’s the right one, the bright one, it’s Martini.”

Then the Stylophone, bringing electronic music to the masses, was launched. The Raleigh Chopper also made an entry and swiftly became the coolest mode of transport for kids in the 70s. British fashion doll, Sindy won Toy of the Year thanks to her new hairstyle with a trendy centre parting.