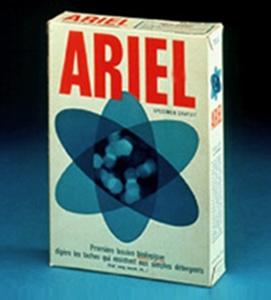 Ariel
It was a year of flight and adventure. The world got smaller with Concorde’s debut flight and the universe got smaller as man walked on the moon. “One small step for man… one giant leap for mankind,” said Apollo 11’s Neil Armstrong to an estimated 600 million TV audience glued to the grainy black and white images.

No surprise that Star Trek, “Where no man has gone before…”, starring Captain Kirk and Spock was a hit on British TV, despite the fact the series had just been cancelled in the US after just three years.

The promises of science were infiltrating daily life with the launch of P&G’s new detergent Ariel, “with enzymes to digest dirt.” It was the first detergent with stain-removing enzymes and promised to tackle, “the really tough stains that other powders leave behind.”

Meanwhile in London, small was the new big. The mini-sized Mini had launched a decade ago and was now firmly ensconced as a cult classic. This was helped no end, by the hit Brit flick, The Italian Job, where it was driven down Turin’s stairways and through its shopping centres.

One of the most arresting ads of the century won awards this year as did dog food Pedigree Chum. A birth control poster campaign from the Health Education Council featured a pregnant man and the words, “Would you be more careful if it was you who got pregnant?”