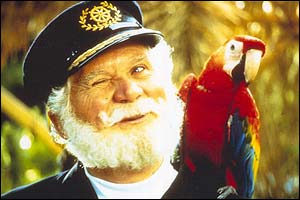 Birds Eye
It may have been a year of discontent for young people across the world, but 1968 was a rich year for brands. It was the year enduring advertising icons Captain Bird’s Eye, the Milktray man and the Dulux dog were created. Not to mention the launch of enduring brands like Pizza Express, Time Out and Calvin Klein.

The clean living old sailor with a white beard, Captain Birdseye launched his long career for Birds Eye frozen food. Early advertising jingles included: “Fresh from the Captain’s table!” and “Birds Eye peas — sweet as the moment, sweet as the moment when the pod went pop.”

Meanwhile, the Old English Sheepdog has become so strongly associated with Dulux paint that the breed has become known as the Dulux Dog. The brave and mysterious Milk Tray man delivered boxes of chocolates for 35 years, “All because the lady loves Milk Tray.”

The first Pizza Express opened in Wardour Street, London, while across the Atlantic Calvin Klein opened a coat shop in the York Hotel, New York. Boom Boom. We were watching Basil Brush, the crazy fox. It was also the year Dad’s Army began, “Who do you think you are kidding Mr Hitler,” which ran for nine years.