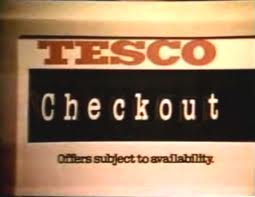 Tesco
Star Wars fever gripped the UK in 1977. The public queued for hours to grab unreserved tickets for the long-awaited film starring unknown actor Harrison Ford. Touts were selling £2.20 cinema tickets for £30 to the waiting crowds.

The cinema wasn’t the only place attracting queues of eager customers. Tesco’s audacious, “Operation Checkout” led by Lord MacLaurin killed off Green Shield Stamps, closed down all Tesco stores over the Silver Jubilee weekend and revolutionised the supermarket.

On Thursday June 9, when the stores reopened a huge number of customers forced Tesco Pontypridd to prematurely close for the day, while Preston shoppers emptied the shelves. Tesco’s checkout revolution started a momentum that carried the brand to its success today.

Campari demonstrated its versatility in 1977 with an ad starring Lorraine Chase as a glamorous woman with a strong Cockney accent. As a gentleman offers to ‘freshen her glass’ he asks: “Were you truly wafted here from paradise?” “No, Luton airport,” she replies.

Meanwhile, as Old Spice aftershave stirred us with a rousing chorus, Old Spice! Refreshing, invigorating, sensual! Perhaps it’s one reason why women are always impatiently waiting for their men to return from the sea!” We couldn’t seem to stop singing Cadbury’s, “Everyone’s a fruit and nut case.”

Appropriately for the year that Star Wars stormed into the UK, the Apple II, one of the earliest and most successful home computers was launched. Then there was BT’s relaunch of its luxury telephone – The Trimphone –with buttons, rather than a dial, for the first time. Not surprisingly, green slime was a big hit among school children.