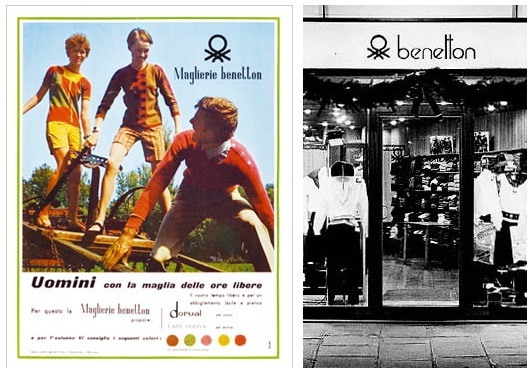 Benetton – Colours Of The World
It was the end of an era for one sector as cigarette advertising on TV was banned. For the clothing and retail sector it was boom time. Carnaby Street had become the epicentre in London for fashionable boutique stores and Twiggy had modelled the first-ever plastic dress.

It was in Veneto, Italy where the tale of another retail clothing brand was blossoming. Luciano Benetton, a Treviso salesman spotted the opportunity for colourful clothing and ten years after he knitted his first collection of jumpers, the Benetton Group was born.

The concept of united colours was always central to Benetton’s brand. By 1965, the brand had developed a procedure to dye finished garments rather than unwoven fibres enabling it to react more quickly to fashion trends. Benetton adopted its slogan, “United Colours of Benetton” as its logo and for the first time in the history of commercial trademarks, the slogan became a trademark.

As Coronation Street became the most watched programme on TV, children were decorating pieces of papers with mad swirls and sweeps thanks to a new toy called the Spirograph.