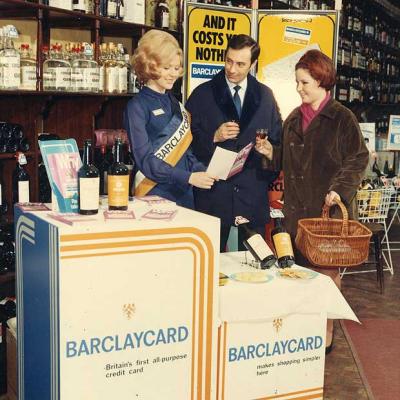 Barclaycard – You Don’t Have To Bank With Barclays To Have A Barclaycard
Everyone was watching the football. England won the World Cup, for the first and last time, in a game against West Germany. The match was watched by 93,000 spectators, including the Queen and Prince Philip, at Wembley, and 400 million on TV around the world.

It was a year of innovation for the banking sector. As Barclay Card launched the UK’s first credit card, American Express introduced the Gold Card. On 3 May 1966, The Times Newspaper started printing news on its front page for the first time, rather than small ads. The General Post Office launched the first Yellow Pages classified directory in Brighton using the slogan, “let your fingers do the walking.”

Two new dolls arrived from American shores. Action Man, the British version of GI Joe, was a revolutionary concept – a doll for a boy. The hard plastic doll had a scar on his face and a range of American uniforms. Later, British costumes were introduced including a range of international World War Two outfits. His name, Action Man, was taken from the popular Danger Man TV series.
Then there was Tiny Tears, a doll who drunk from a bottle, cried and wet her nappies. She was an instant hit among British girls. In this year, memorable advertising campaigns included “Go to work on an egg” and “Ding dong Avon calling…” .