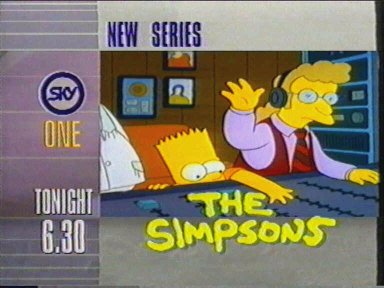 Sky
“Right from the beginning, I said I wanted to be more famous than Persil Automatic,” said Victoria Beckham. In 1993, she joined three other unknown girls to form The Spice Girls. We weren’t to hear from them for several years but Beckham’s ambition to be more famous than the country’s best known washing powder was astute.

Thanks to BSkyB, the British TV audience were developing a voracious appetite for American television shows like The Simpsons.

It was a vintage year for advertising. Dunlop’s Dali-esque ‘Tested for the Unexpected” ad directed by Tony Kaye won awards for its epic campaign mesmerising viewers with surreal images of fat, gold buddhas, desert explosions and masked women and children. Levi’s 501 mesmerised two young girls with the vision of man washing himself in a creek. The soundtrack to the black and white ad by Stiltskin topped the charts the following year.

Boddingtons beer successfully transformed itself from a regional brand to a national brand with regional roots, “the cream of Manchester.” Before Melanie Sykes time, its award-winning campaign featured a glamorous woman applying face cream, which turned out to be the frothy head of Boddingtons. “By ‘eck you smell gorgeous tonight.”

The Intel Pentium processor became a household name with the, ‘Intel Inside’ campaign which features a well-known sonic logo.