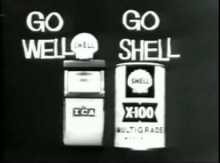 Shell: Go Well. Go Shell
His name was Bond, James Bond. He was a British Secret Service agent and his first film, Dr No, starring Sean Connery, premiered on the 5 October 1962. His co-star Ursula Andress memorably emerged from the sea in a white bikini. It was a glamorous film in a glamorous year. It may have been the year that Marilyn Monroe died, but the era of glamour did not die with her.

It was a year of teddy boy suits and pill box hats. And the year Chubby Checker’s song, “Let’s twist again” topped the charts for 30 weeks. Bing Crosby was crooning and starring in some award-winning advertising for Shell, which involved a whistle-stop motoring tour of Britain, “We’re going well, we’re going Shell, you can be sure of Shell”.

Then we were introduced to the pleasure of some after dinner mints called After Eights. Initially the brand launched three different products – After Eight desert chocolate, an After Eight Assortment and then the mints. Two years on and just the mints remained.

Children were enjoying the novelty of chocolate cigarettes distributed via the all-new candy cigarette bank, a child-sized cigarette vending machine. Animal Magic, the BBC programme presented by Johnnie Morris has just begun. Terry Nutkins would join as presenter later on, while the series ran for 21 years. The Sunday Times launched a colour supplement and families were enjoying playing a new game called Mousetrap.