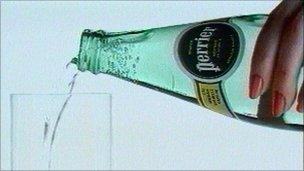 Perrier
Water, water everywhere – it was the ultimate brand accolade. Perrier was persuading consumers to buy a product they could get for free from their tap. The notion of buying a bottle of water to drink like a Coca-Cola or glass of wine was a brand-new concept.

Soon, Perrier, the sparkling French mineral water, was a status symbol. Alongside the Filofax, it was an essential badge for an emerging tribe of British consumers, the Yuppies. It was advertised as the champagne of mineral water, in newspapers like The Daily Mail, at a time when frenchness was a desirable thing to the rising middle classes.

Italian provenance and an operatic gondolier singing O Sole Mio were selling Cornetto ice-cream from Wall’s to great success. “Just one cornetto, Give it to me, Delicious ice-cream from Italy, Vanilla and strawberry dream, Give me Cornetto, From Wall’s Ice cream!” The award-winning campaign ran for a decade and was resuscitated again in 2006.

Krona margarine, the first UK brand that looked and tasted like butter, was recognised for its successful launch. Kelloggs launched a new breakfast cereal called Crunchy Nut Cornflakes. And the delivery of news changed forever with a new channel called CNN.

Meanwhile, two new revolutionary toys were taking the UK by storm. The Rubix Cube won toy of the year as adults and children alike scrabbled to get their hands on the puzzle cube. Popular solutions included peeling off the coloured stickers and breaking the cube open with a screwdriver.

Then there was Pacman, the electronic game featuring four ghosts chasing an eating Pacman around a maze. It led to a plethora of Pacman merchandise from T-shirts to lunch boxes.