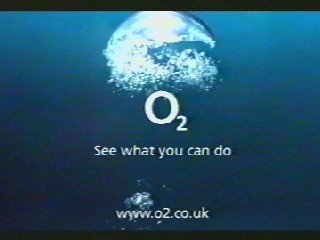 O2
It was the year of the phone. As two moustachioed runners wearing white vests emblazoned with 118 118 jogged into the nation’s consciousness, a new mobile network called O2 bubbled into existence.

The new mobile brand had been built from the ashes of BT Cellnet and immediately detached itself from its history with a powerful identity featuring bubbles. Since then O2 has grown to have the largest active mobile customer base in the UK, signing partnerships with Apple’s iPhone. It has also planted itself within the music industry with the rebirth of the Millenium Dome as an entertainment venue, renamed the O2, offering priority tickets and a VIP lounge for customers.

But back to the joggers, following the deregulation of the UK’s telephone directory enquiries market dominated by BT’s 192 service for 47 years, 118 118 joined 30 new players set to challenge BT. Its high profile launch campaign saw the two 118 runners become larger than life, dominating the papers, the airwaves, the internet and even the streets itself as lookalike runners appeared in the 118 shirts.118 118 achieved a 44% market share of the UK directory enquiries market as soon as 192 was switched off.

Skoda, the Czech car brand that had become the butt of jokes, engineered the mother of all reinventions in 2002. Aided by a new ad agency called Fallon, Skoda used self-deprecating humour that acknowledged the brand’s joke reputation to dramatically improve consumer’s perception of the car. “It’s a Skoda. Honest,” emphasised how the car offered fantastic value for money and led to a rapid growth in UK sales.

In the cake and biscuit market, lunchbox favourite Wagon Wheels relaunched and Jaffa Cakes introduced the Jaffa Mini Roll. Halifax building society sang its way into the advertising awards making stars of its staff, who were featured singing adaptations of well-known songs.
Another award-winning campaign came from the hard-hitting Barnado’s ads depicting mocked-up photos of suicide victims. One ad, featuring a baby injecting heroine, was banned by the ASA. The campaign swiftly raised the profile of the children’s charity.