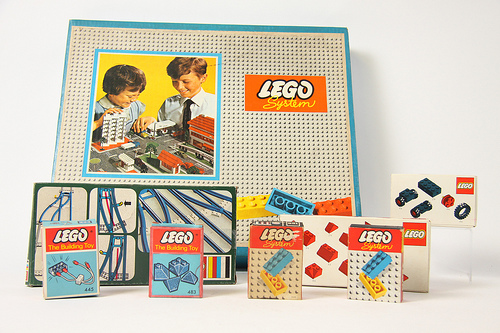 Lego – It’s A New Toy Every Day
Lego was introduced to the British public at the 1960 Brighton Toy Fair. The Danish plastic, interlocking bricks took Britain by storm, selling by the bucket load. The modern Lego brick was patented in 1958 and bricks from that year are still compatible with current bricks.

Lego began creating wooden toys in 1932. In 1960 the warehouse that held all of Lego’s wooden toys burned down, leading the company to concentrate on plastics instead. By the mid-60s LEGO would add a series of model sets which came with drawings and building instructions. Lego was voted Toy of the Century by the Toy Retailers Association of Britain in 2000.

Meanwhile, Dr Maertens designed an orthopaedic shoe for himself when he injured his foot on a skiing holiday in 1945. The first DM boot, christened the 1460, was produced in 1960 in Wollaston, England, after the Grigg family acquired rights to the air cushioned sole. (They added the trademark yellow stitching.) It was popular with postmen and policemen and later adopted by the Mods in the mid-60s.

Strand cigarettes gained notoriety for its 1960 ad campaign, “You’re never alone with a Strand”, for all the wrong reasons. It’s largely regarded as a textbook example of bad advertising. The TV ad depicted a dark, wet, deserted London street where a rain-coated man, played by Terence Brooks, lit a cigarette and puffed reflectively. The public soon associated Strand cigarettes with being lonely and didn’t buy them. Poor brand sales led the Strand to be taken off the market.