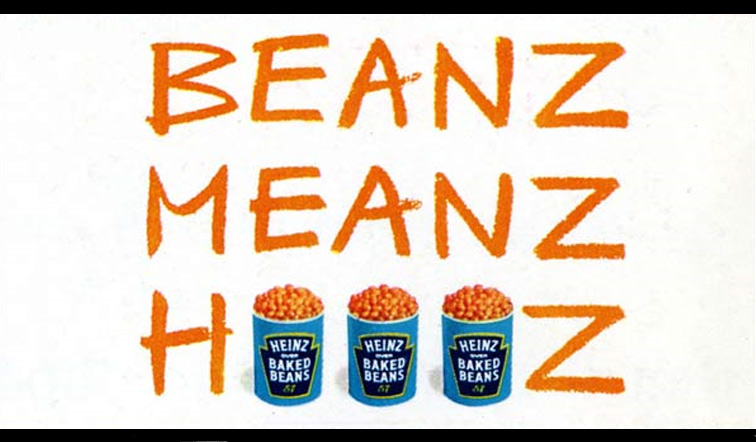 Heinz – Beans means Heinz
The world was painted in colour. BBC2 officially launched colour television. In the same year, “the exciting new sound” of Radio 1 launched, starring many of the presenters heard on offshore pirate radio stations such as Radio Caroline, which had been outlawed.

It was a golden year for advertising. As Clement Freud and Henry the bloodhound amused us with a double-take for Chunky dog food, Meccano treated us to the “Boy in a man’s world” advertising.

Heinz struck gold with a catchy slogan, “Beanz Meanz Heinz”, hatched by Young&Rubicam’s Maurice Drake in a pub. It was accompanied by a jingle: “A million housewives every day, pick up a can of beans and say, Beanz Meanz Heinz.”

Angel Delight and some exceedingly good cakes from Mr Kipling were introduced to the British public for the first time. Initially the Mr Kipling packaging included a handle to carry the box of cakes with, this was later removed, while the handle was incorporated into the logo.

Frisbees and paper clothes were all the rage in 1967. Even the Beatles got in on the act, wearing paper jackets in public. We were glued to The Prisoner, the TV series of number 6, a former secret agent held hostage in the mysterious village. Board games, KerPlunk and Battleship were popular new games.