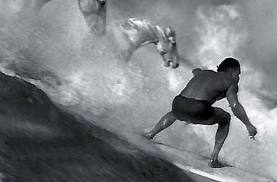 Guinness
I don’t care who you are, here’s to your dream,” Captain Ahab told us in Moby Dick. In 1999, the Guinness Surfer TV ad campaign, inspired by the tale of the whale, went on to win more awards than any other commercial that year, with its story of the surfer taking on the perfect wave.

When we weren’t sipping the black stuff, we were drinking cocktails inspired by a new TV series called Sex and the City, while clubbers, “partying like it was 1999,” couldn’t get enough Red Bull, the energy drink that helped them dance till dawn. Meanwhile Typhoo looked to the east and became the first tea brand to introduce a green tea blend to the UK market.

There was a new console in town, Sega Dreamcast, keen to knock Sony Playstation from its top spot, with built-in internet access for online gaming and the slogan, “Up to six billion players.” On its opening day in the US, 9/9/99, Sega made $98.4m in combined hardware and software sales. The same year, Sony announced plans for Playstation 2 and the following year Microsoft’s Xbox and Nintendo’s GameCube were released. By 2001, Sega said it would no longer be making Dreamcast hardware.