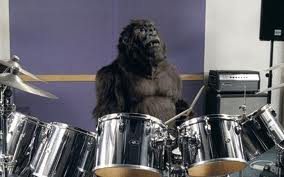 Cadbury’s
It was the year coloured balls cascaded through San Francisco streets for Sony, Snickers brought us an angry Mr T, Shreddies gave us knitting grannies, Skoda built a car from cake and Cadbury’s Dairy Milk reinvented itself with a drum-playing gorilla getting down to Phil Collins.

Cadbury’s Gorilla drummed home the power of viral advertising. The popular ad initially aired on TV but then had 600 different postings on YouTube and was viewed over 10 million times online.

Its soundtrack, ‘In the Air tonight’ by Phil Collins returned to the charts in 2007, 16 years after its first hit, at number 17.

Actor Garon Michael who had played great apes in films like Congo and the 1001 remake of Planet of the Apes played Cadbury’s gorilla, despite some consumer speculation that it was in fact Phil Collins. The ad deservedly won numerous awards. Not only did sales of Dairy Milk increase by 9% on the year before, 20% more people looked favourably on the brand after the ad, according to YouGov.

Sony Bravia’s 250,000 coloured balls had the same viral potency, leading the campaign to win a number of awards. The two and a half minute film filled an entire advert break on its launch in the UK on November 6th 2006, before the game between Manchester United and Chelsea. The advertising for both Sony Bravia and Cadbury’s Gorilla were created by Fallon.